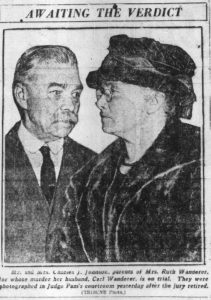 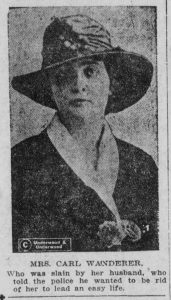 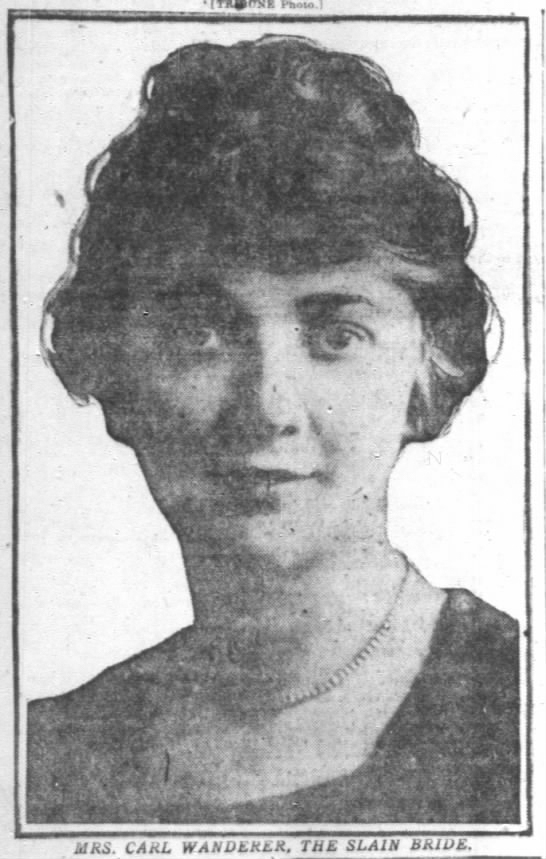 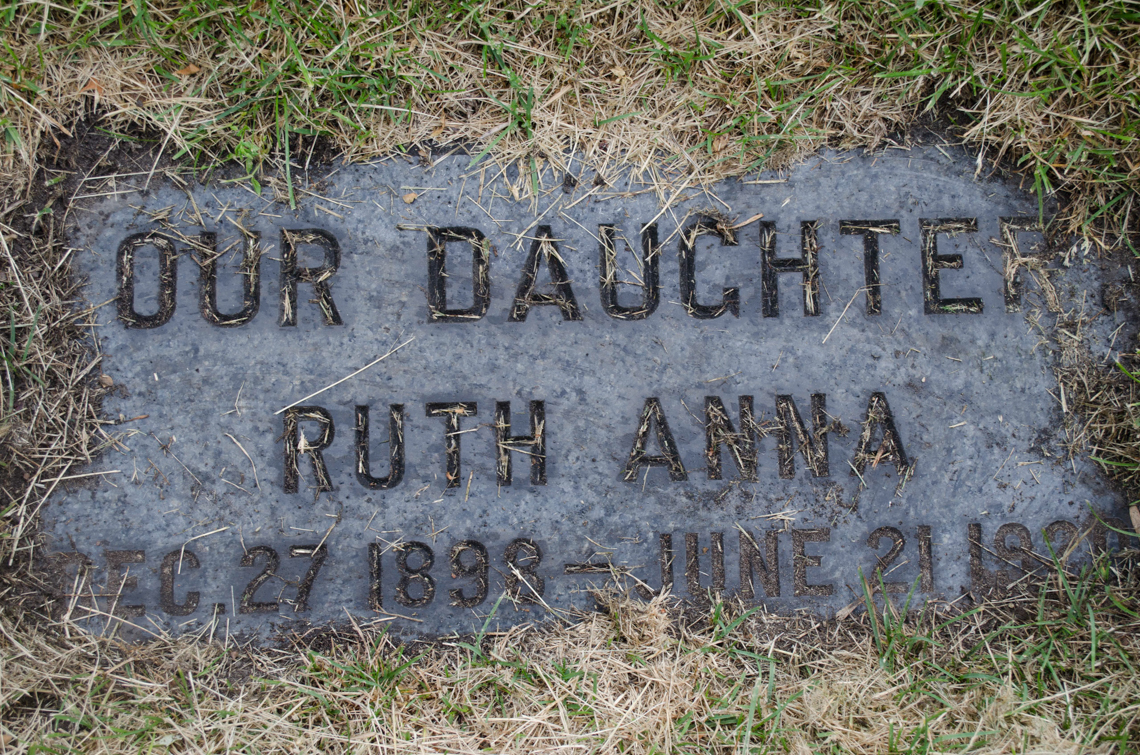 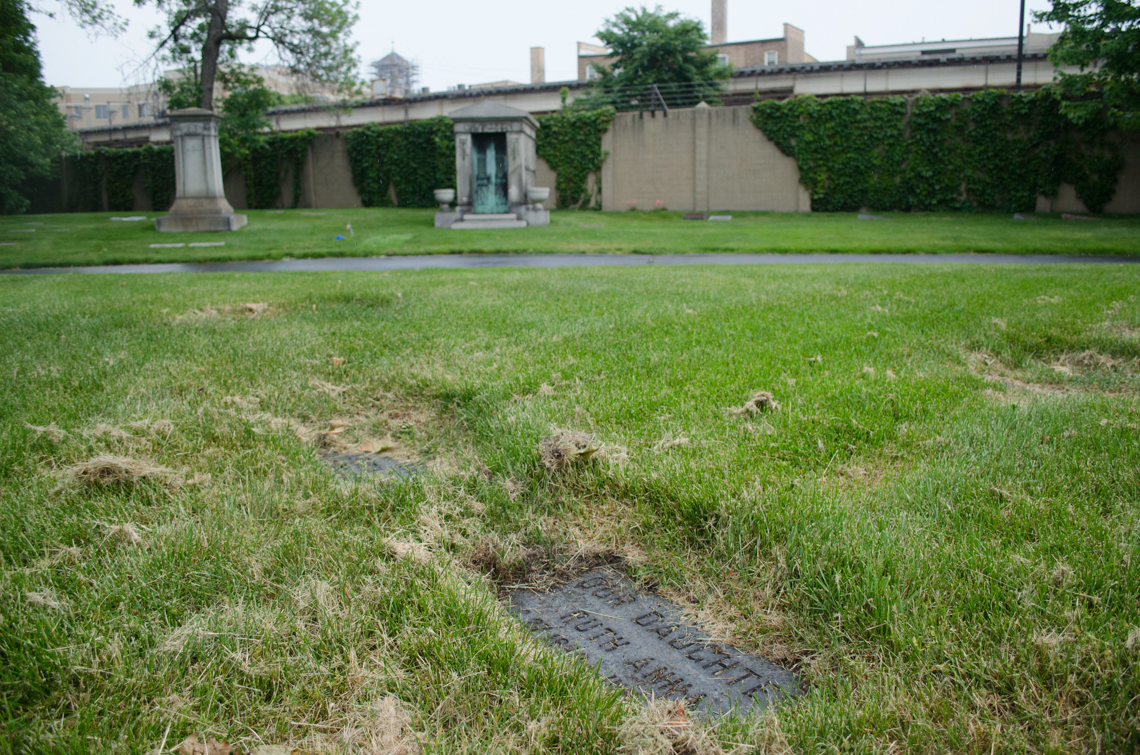 Ruth Anna Johnson was a late Christmas present to her family being born on December 27, 1898. Her mother Eugenia Johnson and father Charles Johan Johnson were both Swedish immigrants and Ruth was their third child. Eldest was son Carl Eugene at age four, while daughter Edith was two years old at the time of Ruth’s birth, though Edith would pass away on Christmas day the following year.

Charles worked as a tailor and Eugenia doted on her children. The family grew up in the Lakeview neighborhood, at 3725 Maple Square avenue, now known as Magnolia avenue. Around the corner from their house was Holy Trinity Lutheran church where when she turned 14, Ruth’s mom let her join the church choir. Singing was her one true joy and it was said that if Ruth wasn’t home or in school she could be found in church singing. The shy girl was able to have her voice heard in all its glory while remaining a face in the crowd.

Mrs. Johnson would send Ruth and Carl Eugene to the Wanderer family butcher shop at 2711 N. Western avenue. The children passed several other butchers in the two-and-a-half-mile walk to the Wanderer shop but Eugenia insisted it was worth it. Charlie Wanderer was a straight shooter who gave her his best cuts and kept his thumb off the scale. It was in the Wanderer butcher shop that Ruth blushed as she stole sidelong glances at the butcher’s boy, Carl.

Years later at a going away party for Carl before he returned to the army, Ruth ran into Carl and agreed to become pen pals after he returned to his unit in Texas.

After being honorably discharged from the the army, and while war had raged throughout Europe, North Africa, Asia and elsewhere, for over a year, Carl settled into his life as a butcher back home in Chicago. He now courted his pen pal Ruth, as much as her mother would allow, as it was Mrs. Johnson’s preference that Ruth not date, until she was 18 years of age. Ruth and Carl found time to see one another however, as both had mutual friends, through Carl’s cousin Fred. A romance was budding in Chicago, while the Allies and Central Powers, started to take drastic measures in Europe.

With the United States joining the Great War, Ruth knew the inevitable would come about. Before being summoned, Carl, knowing that his prior army service would most likely entail in him getting called back to the army, re-enlisted on August 18th, 1917.

Once Carl was shipped off to basic training, leaving Ruth alone, Ruth started worrying about Carl, and wouldn’t stop until he returned home. The poor girl didn’t even have her singing, to give her solace; when Carl left for training, Ruth quit her dear choir. Even though she lived less than two blocks away, she dreaded putting herself in the position, where after choir practice, another gentleman, might offer to escort her on the four minutes it took, to walk home. Her decency would not allow it. So, she stayed home, and worried about Carl.

Carl and Ruth, kept up their correspondence of love letters, and soon the talk of a future together came about. Mrs. Johnson still voiced opposition to the seriousness of the pair though, as she viewed Ruth too young, but a man, being sent off to fight in a war, has a shorter view of things, and Carl was adamant.

“If I can’t put a ring on your finger this Christmas, I won’t come home at all anymore.”

Over a holiday leave from training in Georgia; Carl proposed and Ruth happily accepted. For over a year and a half, the newly engaged couple, would be away from one another; Ruth normally sitting in her room writing letters to Carl or knitting.

Ruth could hardly wait for the wedding. Ruth was a compulsive list maker, and she had already compiled lists of items they would need for their life together, as well as lists of possible baby names for their children. She shared all of her lists with Carl, who always feigned amusement. He did not want a big wedding, nor did he want to plan ahead for their children.

The frugal woman gave in and on Wednesday, October 1st, 1919, Carl and Ruth had a quiet ceremony at the church Carl had attended before he met Ruth. She would have preferred, to have had the ceremony at her church, but she was happy to be getting married and if it made Carl happy she would do whatever was asked of her.

It was the beginning of June when Ruth’s mother had begun to be worried that the expectant father of her grandchild, might not be as excited as her daughter was. Her son-in-law had become distant. He spoke to the family less and seemed morose. That was when he was home; Eugenia took note of Carl not coming home one night at all. The mother feigned not noticing and didn’t say anything to her daughter not wanting to disturb her. Then it happened again. Carl went out and didn’t return until the next day. This time, the mother couldn’t let it go.

Her daughter brushed off her mother’s concerns with,

Her mother pestered her further not believing the explanation.

“Let him have a good time. I don’t want to draw the reins too tight. He must have some fun.” Ruth told her.

Mrs. Johnson, with a mother’s concern, felt something wasn’t right, but she retreated to the shadows. Her daughter was happy, and far be it from her, to share her suspicions, and ruin that happiness.